So i had heard about these river dolphins that were shaped like a penis and were becoming extinct since i had arrived in Cambodia so i really wanted to see these interesting creatures. Was a small town up the side of Cambodia called Kratie so i started the treck from Phnom Penh and made my way by a small cramped Mini van up there.

I arrived into this quiet river town at 7pm as it was allmost dark, poaring with rain and driver yells here get out… Grabs my bag puts on footpath and takes off, i’m standing here going ok wow not even sure where the accommodation is… I take shelter and a local tuk tuk driver comes up and offers me a ride to my accommodation.

The next morning i grabbed a scooter and started heading out into the country asking locals along the way how i get to the Dolphins. With arms, legs, pointing, some big smiles and 30-40 minutes on the bike i arrived..

I walk over at this small office the lady gives me a ticket and i head over to my boat driver who was sitting with his mates under a tree smoking. He was very serious didn’t smile much or say a word but he knew how to track these Dolphins and head to the correct spots!

We started heading out, the river current was unbelievably strong swirling and our little boat was getting pushed around and to be honest i allmost filled the pants a few times..

After a while we arrived at the spot, he grabs a bunch of flax, ties it around the back of the boat and we sit and wait, before too long boom!! They started poping up out of the muddy water and next thing a few packs of them started to appear..

It was hard to believe this massive, muddey river with such strong currents was home for these creatures.

We stayed for about an hour in the middle of this stong river swirling around us watching them.. Don’t think my photos does justice to these creatures as they were hard to snap as they wern’t long at the surface.

We finally start making our way back after the boat driver woke up from a very deep sleep on his cushion at the back of the boat. He cranks the motor and away we go back to base. We arrive back at base, we have this selfie below and he goes gets back under the tree with his mates. 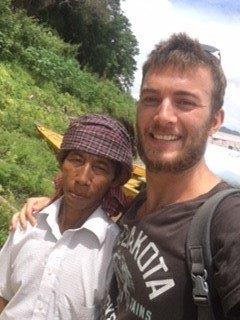 I spent another day or so of exploring Kratie, visiting temples, talking to some monks and riding around the country side.

Come to leave Kratie & i book transport to Siem Reap and wow the experiance of a 6-7 hours mini van journey was a story on it’s own!!

It involved a bus chocker full of mainly locals, i had knees round the neck and the back was full of bags, live chickens flutering around and in the isle of the van was loaded with bags of rice, fruit and other goods so when we stopped for a toilet break it was adventure just getting out! Muddy roads with the van sliding from side to side, on coming trucks scraping past and steep drop off’s from a muddy road had my heart working hard!

We then come to this tidy river town, we stop and no one knows whats going on. No one reallys talks english and next thing we drive down a dirt bank slipping, sliding and onto a barge loaded with trucks, motor bikes, live animals you name it!!

We go up the muddly swirling river for 10-15 minutes and then we drive off and carry on the journey towards Siem Reap with the van loaded to the roof and the knees round the neck..

Oh and did i mention this was a VIP mini van so this was one of the better modes of transport in Cambodia!!

This site uses Akismet to reduce spam. Learn how your comment data is processed.

Artist | Free Thinker | Traveler On these platforms I will be sharing art, my writing, posting stories from travels, life experiences, adventures, sharing news articles and much more. My wish and mission is to promote free thinking, to inspire, unite, encourage, motivate humanity and to spread peace and love on this planet. As Mahatma Gandhi said “Be the change you want to see in the world” All Platforms: https://linktr.ee/nomadtraveller